October 11, 2014 will forever mark a momentous occasion for me. It was the day I got to finally meet two young women, Leticia, who has graduated high school, and Elizabeth who just began her senior year. I had the pleasure of sponsoring Leticia through four years of high school and am currently sponsoring Elizabeth with my husband, Justin.

Traveling in Ghana, it became clear that women are still very much second class citizens. They cannot support families on their own, and often have little to no say in their family life. Families will often send boys to school over girls, if given the option. Because of this, it was important to me to sponsor girls through Anansi, to afford these young Ghanian women an opportunity to change the culture and climate in their home country. In both girls’ cases, school would not have been possible if it were not for Kathryn, Anansi, and the gathering of scholarships each year.

It was wonderful to meet these two strong young women. As for Elizabeth, she had a confidence and outgoing, gregarious nature rarely seen in Ghanian girls. I immediately noticed her strength of spirit and joyful nature, which set her apart from the other girls I’d met in my time in Ghana. Perhaps I’m biased, but she was set apart in my eyes. She had a twinkle to her spirit that spoke volumes, and I do believe that she will make the most of her education and continue on as a proud example to her family and community.

My other student, Leticia Botchway, and I came of age together in many ways. Meeting in person, I think we realized just how close in age we actually were. I began my sponsorship of Leticia when I really had no financial business offering money to a bum on the street, let alone donating several hundred dollars for what was then a four year high school education. But I was moved, all those years ago, and I’ve never regretted the decision. And how wonderful to finally meet that bright young woman, now working as a teacher and saving what little she can to afford to attend nursing school. While an Anansi student, I’m told she was a favorite among her peers, she is now an inspiration to Elizabeth (who also wants to become a nurse) and I can honestly now say, she’s a friend to me for always. She’s got a bright future, in a part of the world where many women don’t have much hope for independence and income. 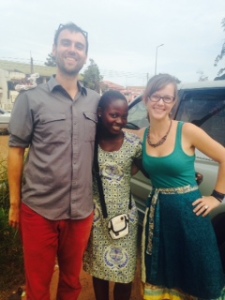 In the end it was quite clear that despite our differences in age and culture, we were just three girls, belly laughing at the same silly jokes, all delighted and excited to meet one another face to face for the first, though hopefully not the last, time.